December 22, 2015 (Isla Roatan)
Today was our second day that we could leave the ship. Isla Roatan is an island off of the Honduran coast. Mahogany Bay, where the ship ported is an invented city that has been created by Carnival Cruise Line. Carnival constructed an outdoor shopping center and partnered with every shop to split the proceeds. The same is true for every business along the beach. 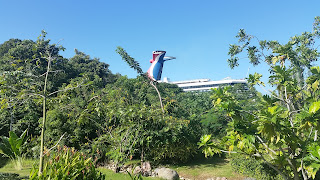 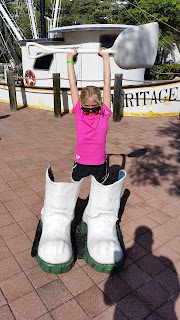 After eating breakfast at the buffet, we entered the line to get off the ship. Despite hundreds of people leaving at once, it was a fairly smooth process. As soon as we got off the boat, we could see that another Carnival ship was docked and had people getting off at the same time. Everyone was forced to walk through a duty-free shopping center before entering the ‘city’. It appeared that there were only three things to do at the port: Shop, go on a zip line or go to the beach. We opted for the beach. 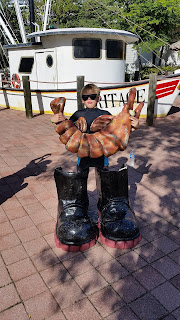 Each of us wore our swimsuits and I had beach towels and the kids’ cheapie snorkeling gear in my backpack. Along the trail to the beach, there was a hike that I noted that I wanted to go along once we were done with the beach. The beach was partitioned into two parts. A smaller, more private section that cost $65 or the free section. Of course we chose to go the free route. At the free section, people could rent a private hut for the day for $200. For $45, one could rent a covered two-seated area. Then there were two rows of free chairs the spanned the length of the entire beach. We were early enough to have our choice of free chairs. We chose to sit under trees in a naturally shaded area. The beach itself consisted of soft white sand and the clear blue water that has accompanied the trip. 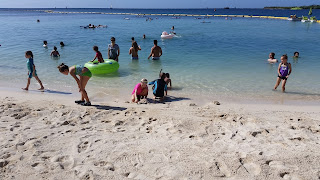 It was with our beach gear that we finally identified the inevitable thing that we forgot. With the kids’ snorkeling gear, each set came with a set of goggles and an attached breathing tube. When unpacking, we couldn’t find a second breathing tube. It was pretty much a non-issue because Emery made a friend to play with on the beach as soon as we got there. She played in the sand and built a castle with a girl. Emery ran to us, excitedly and told us that the girl lived on the same level as us and she lived just around the corner on the odd side of rooms. While the girl played with sand, Tate floated along the surface of the water, snorkeling.
I was perfectly happy to sit on the beach and read a book. Leigha was perfectly happy to relax in the sun. Tate was perfectly happy to snorkel. Emery was perfectly happy to play with another little girl. Until she got hungry. The kids are accustomed to eating in the eleven o’clock hour due to school. Emery is the only one that hasn’t learned to adapt her eating schedule when she isn’t in school. After giving Tate another half hour to swim, we left the beach. As we walked back, we decided to take the hike, which was really an alternate to walk back to the ship, but through the tropical foliage. Emery complained the entire time, until we realized that it was actually a shortcut. 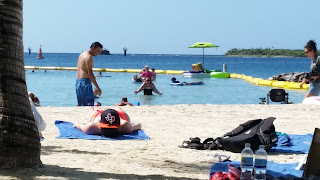 After lunch, the kids both decided that they wanted to go to the kid area and play video games. We told them that they were more than welcome to go there, but they had to be aware of the possibility that we may go zip lining without them and that we wouldn’t pick them up until dinner time. They were fine with that and off they went to play without us.


After looking down at the make believe city from the ship, we decided to walk around and look at what they had to offer. Leigha wanted to look for a visor. These serve several purposes: to protect people from the sun, to make you a better gambler and to prepare you to work at Starbucks. After five
or six shops, Leigha was ready to concede that visors weren’t popular enough to be able to find one when magically, three different choices appeared from a rack of hats. 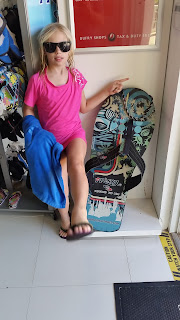 
We went back to our room happy and ready for bed.