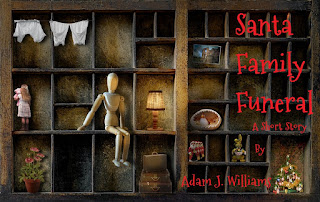 Like any function with my family, there was an excess of food and plenty of laughter. Tabletops were scattered with dirty plates and board games. A table was set up for the kids, a pile of cards placed in the center. Adults reminisced while children played tag indoors. People posed for pictures, hugging one another. It was more like a family reunion and less like a funeral.

When I was fifteen, my grandmother fell and broke her leg. Because her bones were too brittle to
operate on or reset, her body was unable to take the shock and she was taken to the hospital to die. The newspaper said that she died from complications due to a broken leg, but in reality, she was eighty-seven and her body had given up.

I remembered when my dad sent me to spend a week with my grandma. I think that he realized that I didn’t really know her that well and she didn’t have much more time for me to get to know her. For a week, I watched television with her. She didn’t drive and rarely left the house. In the middle of her kitchen was a broken dryer that she called her bread box. You could open the door and find packages of white bread and donuts. She wrote in her journal every day; her entries like a deranged weather forecast. “Cloudy today. Seventy degrees. Rained like a cow pissing on a flat rock. The squirrels came back twice.” I had grown to know her as a feeble woman whose back had grown humped from years of leaning over a walker that was too short for her. My father knew her as a charismatic woman who stood taller than most men.

In the waiting room, a nurse broke our circle of chairs, stepping over coffee-filled paper cups. “Excuse me,” she said, “If you want to spend a moment with her, this is the time.” We made our way to her room, uncomfortably stuffing too many big people into a small room. It was like watching circus clowns get back into a little car. I stood at the side of her bed and watched her shallow breathing. Her eyes were shut and her mouth open. Her tongue, dry and hardened, moved slightly when she breathed in.

It’s a weird thing, watching somebody die. My aunt shuddered, tears running silently down her cheeks.

“Oh mom,” she said, “We’re going to miss you.” Then she leaned down, kissed her mom and spoke inaudibly into her ear. I watched while Grandma’s breathing slowed to a stop and she grew still. I had only seen her motionless once before. I remembered one of the nights when I stayed at her house. I couldn’t sleep and went into her room. She lay silently on the bed. I thought that she had died until she started to snore. I had never seen her motionless before. For as long as I could remember, she had taken medicine that caused her to shake. She looked like she was always shivering. As a kid, she was shaky grandma to me. But in the hospital, she was lying still and she wasn’t snoring. I hugged her stiff body and kissed her cheek.

“I’m sorry I didn’t know you better,” I said, knowing that she couldn’t hear me.

At the funeral home, my Aunt Maryanne insisted that a blanket cover the crucifix behind the casket. Both her and my grandma were Jehovah’s Witnesses. I asked my Dad what it meant to be a Jehovah Witness. He leaned toward me and whispered into my ear, “Ask your aunt when she gives you a Christmas present.”

At six feet tall and weighing two hundred thirty pounds, I was only an honorary pallbearer. In most families, I would have anchored the procession, but by my family’s standards, I still had several inches to grow. Both up and out. While the coffin was being carried out of the funeral home, my little sister, Heather tapped me on the shoulder.

“What’s the guy in the front’s name, again?” she asked.

“I don’t remember. I feel so bad because I don’t know anybody. They make me feel short and skinny.”

My Dad was twelve years younger than his closest sibling making him very much the baby of the family. Because he was so much younger than everyone else, he didn’t know most of his immediate family, let alone the extended one. When we went to family reunions, I didn’t know who anybody was. I recognized faces, but couldn’t match them with names. It felt like I was visiting relatives of Santa Clause. Everyone was big, fat, jolly and willing to match wits with anyone. I watched in amazement as my six-foot tall cousin breast-fed her five-year-old son. “She lives in England,” it was explained to me, “things are a little different over there.”

After the funeral, any somber feelings dissipated. My grandma hated to be the center of attention and never wanted people to worry about her. I didn’t know how to feel. I felt sad because she died and I felt guilty because I kept thinking about her dry tongue. I felt bad for not feeling bad enough. I didn’t know how I was supposed to react to death. I watched somebody die, yet it never felt like a moment of mourning. I was given pats on the back and offered clichés as words of solace.

“She lived a full life. She’s in a better place now. She’s not in pain anymore.”

My aunt wrapped her arms around me. “It’s a normal reaction to be sad,” she said. “This is what she wanted. That woman was too damn stubborn to give up. She chose to go.” She pulled away from me and picked a piece of lint off my shirt and stared at me with a smile. “Now, let’s get you something to eat.”