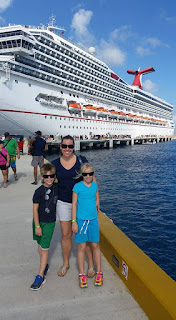 December 21st, 2015 (My 36th Birthday)
Today, like most days, I woke up earlier than the rest and went to the Habana Club to write. After writing for about an hour, two little kids jumped out at me, yelling “Happy Birthday!” While I went to the room to change clothes, Leigha took the kids to get some breakfast. After I found them, I got some food as well. By the time that I had gone through line to have an omelet made, it seemed like I missed my chance to have breakfast with my family. The worst part of a cruise is probably the lines. There are always hundreds of other people that want to do the same thing that you are planning on doing.
After breakfast, we left the ship for the first time. We were at Cozumel. The last time that we were on a cruise, it also ported in Cozumel and it was my least favorite port. I thought of it as a port where everything was haggled for. “Hey, what’s your name? Hey pretty lady, would you like some jewelry? Hello family, let me show you something.” On top of that, the last time we were here, we left the port to walk the streets of commercialism in search of a free charm that was provided by being on the cruise. 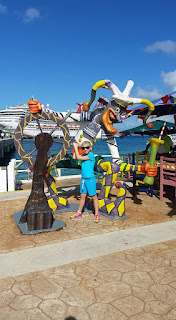 This time, we got off the boat and were sucked into the photo-op props. There was a birthday cake that you could stand inside and it only seemed appropriate for me to get inside. (As it turns out, this is a common prop at each stop because there is a good chance that with thousands of people leaving the ship at once, there are a few people that are celebrating their birthday.) 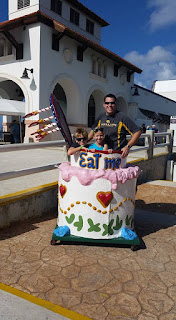 As we walked through the shops, I thought that it was a bad sign that the kids stopped at the first shop. They were selling wind chimes made from shells. The people working there weren’t pushy at all, but they were the exception. The next shop that we walked by pulled the kids in with personalized bracelets.
“What’s your name?” the man asked.
“Tate.”
“T-A-T-E Yes? I’ve got one of those. What is your name?” he turned his attention to Emery.
“Emery.”
He reached down and grabbed one with her name and had it on her wrist in a quick fluid motion.
“How much?” Leigha asked.
“Twelve dollars.”
“For both?”
“Apiece.” Thus began a one-sided barter. Leigha wasn’t haggling or arguing with the price, but refused to overpay. After a few rounds of the man lowering the price, they agreed on a buy one, get one free deal. He looked around and told us not to tell anybody of such a deal that he made us, 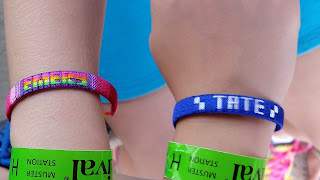 because we were now friends. I didn’t want to tell anybody because I didn’t want to be there. Ports of call are filled with American chain restaurants that I’m not interested in shopping at when I am home. There are also an endless amount of shops selling what they think that people want such as authentic Mayan ponchos with NFL logos.
The man couldn’t find Tate’s name, but told us that it would only take four minutes to make one for him. We acquiesced and Leigha and I wandered around the store looking at overpriced trinkets, knick-knacks and baubles. In addition to paying for the bracelets, the kids were getting a show. It was pretty impressive how fast the man was able to weave letters into the little strands of yarn. 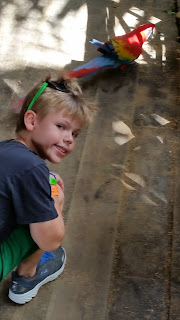 After we left the shop, I pretended that I was deaf and blind. I wasn’t interested in buying anything from the shops or posing with a mariachi band or Mayan warriors. I wanted to see what excursions we could find for cheaper than what the cruise ship was offering. The first place that we stopped at only had water excursions. The second place took tourists to replica Mayan ruins for fifty dollars apiece. Finally, we found a driving tour of the island that was two and a half hours long that took us to the sole remaining authentic ruin. Our guide, Manuel was a former diver that was in his mid-fifties. He had moved to the island thirty years prior after Cozumel had built the first international port. He told us that he had kids our age, twenty five and twenty four. Leigha loved this because it really didn’t seem as if he was pandering to us. 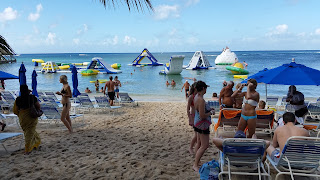 According to Manuel, Cozumel is a city that has roughly 95,000 residents few of which are locals. Wealthy Americans and Canadians own the large houses while Mexicans from other areas live in the smaller houses. We started off driving parallel to the coast. He showed us different bars where people snorkeled, looking at sting rays and tropical fish. As a former diver, he was knowledgeable of the water. He told us that he still like to dive, but for a guide to be profitable, they had to dive five times a day five days a week. He was simply too old to do this anymore, and he loved to show people the island.
“In this area,” he pointed out. “The water drops and it is so clear that you can see one hundred feet 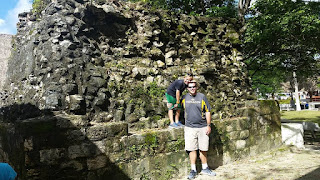 down with no problems.” In nearly every area of the coast where people dove, it was illegal to kill any marine animals. It made sense as the entire city relied on tourism to fuel their economy. As we were driving along, he started honking at a car that was driving towards us on the opposite side of the street.
“This is one of two roads on this island,” he told us. “On this road, you can only drive one direction. The other way is for bikers and runners only. We want people to be healthy and safe. 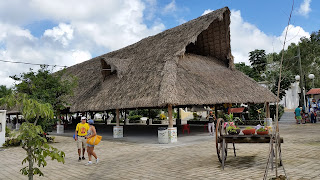 He took us to a resort called Chankanaab for a short pit stop. Chankanaab is a Mayan word for lagoon. Here, they had clean bathrooms, alligators in captivity, parrots and a beach full of chairs, bars and floating fun on the water. The beach had white sand and blue ocean water. 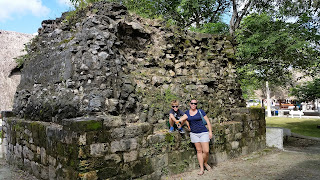 Our next stop was a reconstructed Mayan shopping complex. It was here that the city’s only remaining original ruin stood. I wanted to get a picture of the house, but a man dressed as a Mayan warrior stood in front of the house, asking people to take pictures of him. I wasn’t interested in a picture enough to pay for it, so we went to the back of the building and got some pictures there. Manuel showed us mossy stone replicas of Mayan calendars. He explained to us that the ancient Mayans had nineteen months. Eighteen of them were twenty days long with a solitary month that was five days long.

The plaza was filled with small shops similar to the port. People were selling junk made out of black coral. The difference was that the plaza wasn’t as clean as a place maintained by cruise ships. There was more of a rustic feel to the plaza. It seemed like many of the shop owners may live in the back of their shops. As we walked along, disinterested in buying the people’s wares, a woman told us that it didn’t cost anything to look.
“It’s only money,” she told us.
After leaving the plaza, Manuel took us to the less tourist-driven areas. He took us through neighborhoods where houses were small and in disrepair. He told us that many people started with a one-room house and built up. Roughly a quarter of the houses had some sort of shop in the front. People sold grilled chicken or tacos or had general stores. This is where the locals lived and shop alike. We drove by 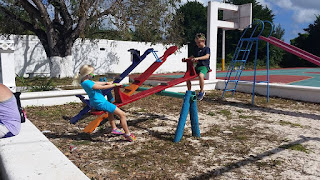 water treatment plants. He told us that the water was undrinkable and that the entire island needed to buy their water from one of the five locations that were open twenty-four hours a day. He showed us sports parks that were free to the public. They were filled with basketball courts, soccer fields, tennis courts and tracks to run on. He showed us statues of the first white man to marry a Mayan woman. He told us of the survivors of a ship wreck that became a wealthy monk. Leigha and I found it interesting, but Emery was bored and vocally so until she fell asleep. True to form, Tate was quietly accepting of the situation until he got hungry. 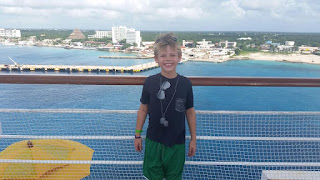 When the tour was over, we returned to the ship for a late lunch. Then the kids wanted to play a game of shuffle board. The equipment was well-used and the ground wasn’t smoothed out for better play. It was as good of a way as any to spend the time. When it wasn’t our turn, Leigha and I walked to the railing and looked down at the tropical plants and clear water.
Once the game was over, we returned to our room and the kids put on their swimsuits. Leigha wanted to relax by the pool. I wanted to catch up on some writing. She took the kids to the pool and after a few minutes of writing, I took a nap. For the second consecutive day, Emery wanted to participate in a bag toss tournament. We returned to the same bar and formed a team of boys and another of girls. Unlike the previous day, this group was filled with more young kids. Leigha and Emery won their first round. Tate and I moved on by default as the team that we were supposed to play never arrived. We each lost our second round matches, but stayed around to watch the remainder of the matches.
After the tournament was over, the kids weren’t done playing games so we moved to the front of the ship and played more games. On a deck outside the kid room, we played foosball, ping pong and Tate showed another kid how to play chess with the giant pieces. It was great to see Tate and Emery play with other kids. It was a fun and relaxing atmosphere. Leigha talked to a woman that was single and had her three kids on the cruise with her. She refused to leave the ship because she was outnumbered and the kids were too young to listen to her. 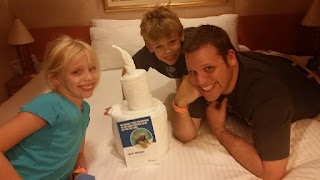 At dinner, we sat next to a table with a couple, Joe and Ruby. Joe was a talkative man and Emery ate up all of the attention that she could get from him. He told us how they cruise often and were considering buying a property at the Isla Roatan, the next port. He told us that he was gambling on the ship and winning big. All of these winnings he was setting aside and planning on giving to people in need. He was a successful man that was compelled by God to give his excessive possessions away. The more that we talked to him, the more that it seemed like he was friendly man that enjoyed talking to strangers. He was too nice for me to point out the irony in buying a property on a whim was still accumulating possessions. He and Emery seemed to be great companions in that they both enjoyed talking and having people give them attention.
After dinner, they were playing a movie at the pool that I was interested in seeing, but I had a slow-building headache that convinced me to go to sleep instead.