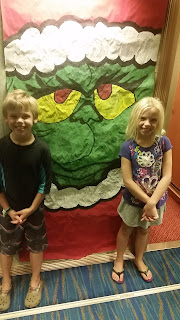 
With no more ports, it was time for us to truly take part in all of the events that the ship had going on. After breakfast, we attended our first Morning Show hosted by the cruise director, Jase. As it turned out, we weren't missing too much by not coming on previous days. Pretty much, they told us the activities that were listed on a sheet that was delivered to our room each day. The best thing that came out of the Morning show was a tip about a floor that decorated their doors with lights and posters with Christmas themes. After the show ended, I took the kids through the halls, looking for people that were more festive than us. 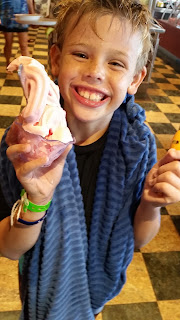 After so much travelling the previous day, we were more interested in relaxing in the sun. That is, of course, until Tate found out that he could play video games at the kid center. While he stayed inside playing video games, the rest of us went to the pool. Emery sat in a hot tub while Leigha and I enjoyed the sun on the swim chairs. After fifteen minutes, I realized that I had read the same page of my book over and over and hadn't retained anything, so I decided to move somewhere quieter. I walked around the ship for a bit, looking for a good place that there weren't many people. I sat down nn a room that was next to the comedy club that was empty. The lights were off in the room, but there were comfortable chairs next to the windows. As I sat down, I noticed that the ship was stopped. I looked out the window and realized that we were in Cozumel again. Then they made an announcement that we were making an extra stop due to somebody needing medical attention. I read my book and occasionally watched as a police boat escorted a water taxi from the ship. 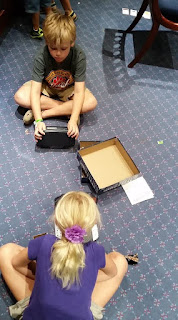 When it was nearly lunchtime, I stopped reading and picked up Tate from the kid room. We met the girls at the pool and each got our lunch. As soon as we sat down next to the pool with our food, it started to rain. We joined the mass exodus to an exposed area and finished our lunch.
After lunch, Emery wanted to go to a holiday arts and crafts activity. When we got there, I don't think that they took into account the number of kids (over 200 aged 6-9) that were on the ship. We got a table, but there was minimal amounts of supplies for the kids. We each got a holiday pin to wear, but Emery was the only one that seemed to enjoy the project. Drawing/cutting/gluing random objects is the type of project that she does on her own when we are home. 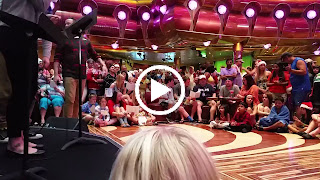 After the arts and crafts project, we decided to check out the game room/library. When we got in the room, other people were staying occupied with games in the room as well. All of the seats were full, but the kids were more than happy to play Battleship on the floor. 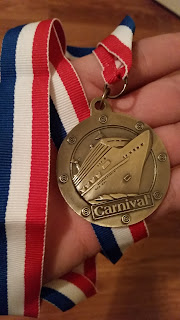 After the kids played a few games, we went down to our room and put on our ugly Christmas sweaters. In the main lobby people that were wearing ugly Christmas Sweaters were invited to join the cruise director in a circle and show off our cheesy sweaters. We passed around his mic and we each said our names. He was blown away with the amount of people that participated and he gave out
medals to everyone. It was a fun, festive time and also the first time in that past week that felt like Christmas to me. It was nice as people started caroling. 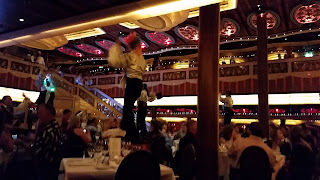 This was one of the nights that I imagine the wait staff hate. In the middle of service, they are paraded around the room clapping and singing. Then a few of them jump up on tables and dance on them. But don't be mistaken, this isn't dancing on a table like Coyote Ugly or a sorority party. It was obvious that most of the people were neither comfortable nor good at dancing. Most people did the awkward arm jostle as they waited for the song to end. Meanwhile, the maitre d stood on the steps watching them like a parent as he reminded them to smile. 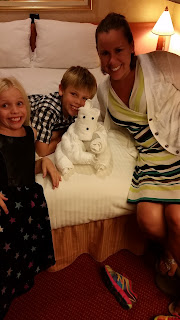 After dinner, we went to one of the comedy shows that were meant to be kid friendly. I can't speak for the comedian's adult routine, but the PG version wasn't very good. To sum up the entire routine, the comic said that kids today are too reliant on technology and couldn't survive in 1975. The whole time, I kept thinking that I only need one week to come up with a better routine that didn't talk down to a large section of the intended audience.
Once we were done with the comedy show, Tate wanted to return to the kid area and play some more video games. Emery, on the other hand, loved the idea of having both parents provided their undivided attention to her. The three of us got some ice cream, sat at the pool and chatted for an hour. While the day was fairly low on activities, it was really high on relaxation.