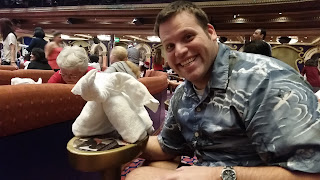 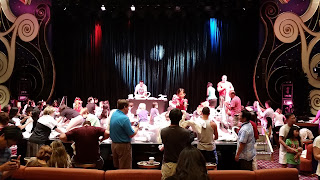 Today seemed to be all about towels. After breakfast, we went to an interactive towel folding presentation. As the kids were excited for the towel animals in our room each day, it only made sense that they learn how to make some of them. The cruise director allowed all of the kids up on stage and let them spread out to make their animals. We learned how to make elephants, dogs and a sting ray. 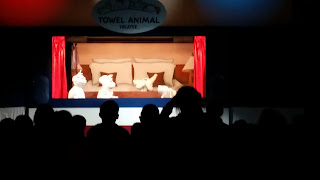 After we learned the most important part of being a steward, we got to see a puppet show filled with towel folded puppets. The sound quality was so bad that it was difficult not only to understand the show, but it was hard to pay attention. 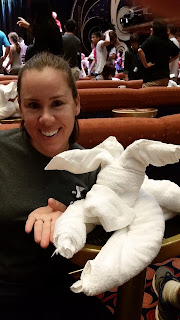 After the show was over, we decided that there were a few things that we needed to do before we got off the cruise ship. First we went to the top level and played a round of mini golf. 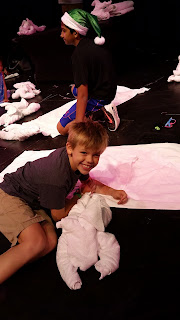 Although we had come to the mini golf course for the hole-in-one competition, it was too windy that day to actually play a round. To keep it friendly, we decided not to keep score. As we started each new hole, I said the same thing: tie game. 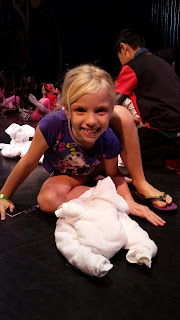 Once we were done with our round, we went to a magic show. He had stopped by our table one of the nights that we were eating dinner and performed some sleight of hand routines. He was a pretty funny but difficult to understand. He said that he had been performing magic for thirty years as a hobby, but finally allowed to work professionally as a magician for the past three years. I was glad to support somebody else that was trying to turn their passion into a profession. For his finale, he took a bunch of tissues, tore them up and ate them. He did this for about three minutes when Leigha was so
grossed out that she was ready to leave. I thought that it was pretty evident that he was pulling wads of chewed up paper out of his mouth and putting them into his pocket. Despite the buildup that was entirely too long, I wanted to know where it was going to end up. It ended up with him pulling a string out of his mouth for entirely too long.
Next, we went to the water slide. Leigha didn't want to have any regrets, so she made sure to get down the slide. As we were standing in line, I heard a bunch of kids say that the slide was slow. When it was my turn, I decided to show them how to make it down the slide fast. The first trick is to jump up and catapult yourself down the slide. The second trick it to lay flat with your arms held tightly against yourself as if you were on a luge. The final trick is to weigh as much as two or three kids. 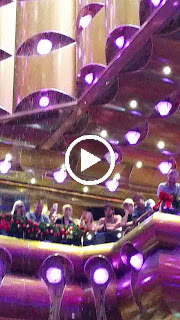 After the pool, it was time to start celebrating Christmas properly. In the main atrium, much like the previous day, we joined hundreds of strangers to sing Christmas carols. Throughout the week, they promoted the event by saying that it may or may not snow. Aaaaaand there would probably be a mystery visitor. Although my kids no longer believe in Santa Claus and they've lived in a place that
actually snowed, they were pretty excited. During the second song, Let it snow, it began to snow. And by "snow", I mean bubbles. The kids were advised not to stick their tongues out and catch the flakes in their mouth. During the penultimate song, I noticed that a line was forming at the nearby theater entrance for the Christmas show. I left behind the fake snow when Santa started to make his way down the glass elevator. Once the singing was over, we got seats in the auditorium for the Christmas show. The kids were invited to move to the front row. Emery jumped at the chance even before she knew that she got some reindeer antlers and got to go up on the stage. Tate opted to take a nap. The show had a bit of everything: ballet, singing, Santa, the Grinch, little kids and the ship's captain. 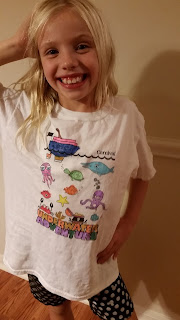 Later, after dinner, we decided to go to the second family-friendly comedy show. The comedian was referred to as the Cowboy Comedian. His routine was similar to the previous night. It was filled with 'kids these days' observations. But where the show the night before was filled with jokes about how terrible kids were, this routine was more along the lines of kids have it so easy now jokes. Tate and Emery thought that it was funny. Leigha and I thought that it was funnier than the previous night.
Once the show ended, we took the kids to the kid area because they were able to make shirts for free. And because we didn't have any more clean clothes for the kids to wear. While the kids worked on their shirts, Leigha and I stood along the railing and watched as we passed other, smaller ships. We could see a green light shinning on the side of the other ship and figured that it was some kid with a laser pointer. After about fifteen minutes, we picked up the kids and went to the pool so that we could watch Home Alone. As I sat back on a pool chair and watched a Christmas movie that starred a little boy that was roughly the age of the kids that came out when I was roughly that same age. During the movie, I got up and made my way to get a cone of ice cream and thought that it wasn't quite the Christmas that I had grown accustomed to, but could see the family repeating a similar trip. As I was getting my ice cream, an announcement came overhead reminding people that flashing lights at nearby ships can change the calibrations to other ships. I imagined a teenager being really proud of himself as he was scolded by his parents. When I returned to my seat, I thought about the trip ending. I believe that there are really only two kinds of vacations: fun and relaxing. As it turned out, this vacation walked a fine line between the two. It was a great time, but I didn't come home feeling exhausted.